Please read The Ordeal of a Lifetime, Part One, Part Two and Part Three,  before reading Part Four. This is for this week’s  Spin Cycle topic, Time.

When my husband took me on a cruise, to celebrate my 50th birthday, I ignored the advice of  every professional travel planner on the planet,  did things my own way, and in the process, managed to survive The Ordeal of a Lifetime. This is Part Four of the  story. It is true, y’all.  Every single detail of it.

Well y’all, in Part Three of this saga, we had finally gotten our camera bag back, which was tossed to us, a la Michael Jackson’s dangling baby, through the open window of a moving cab. As the cab driver, “Dragon”, sped off in the direction of Raleigh, we were right on his heels.

We were seriously running out of time. Tick tock, tick tock; with each passing minute our stress levels were ratcheting up a notch. Now we had only 25 short minutes to complete our drive into Raleigh, find a place to park at the airport, get our five suitcases, camera bag, laptop case, pocketbook, incredibly heavy golf club bag which was stuffed with two sets of golf clubs, plus our shoes and a bottle of Peach Schnapps, and my itinerary into the airport, through security, and somehow onto the plane.

I was formulating a plan.

“OK, when we get to the airport, let’s not bother with parking the car. Let’s just pull up right in front, have Klinton drop us off and head right on into check in.” 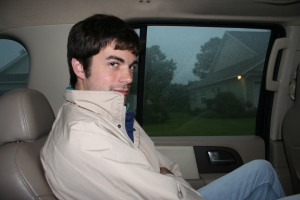 To which The Devil’s Advocate, who looked amazingly like my husband, but with deep worry lines etched into his face, and a whole crop of new white hair around his hairline said, “And what if we miss the plane?”

I shuddered, thinking of another cab ride. “Well, we can call Klinton and tell him to come back and pick us up!”

To which The Devil’s Sidekick, who looked amazingly like my son in the back seat replied, “I didn’t bring my cell phone.”

“Because the battery was low, and it is on the charger,” he said calmly. ” That’s why I didn’t answer when you were trying to call from the Wilmington airport.”

“We’ll give him OUR cell phone!” Jeff announced. “We won’t be able to use it on the ship anyway, and at this point, it won’t matter anyway, because we’re probably not going to make it there on time.”

As I was gloomily muddling over the prospect of missing my first EVER cruise,  not to mention all the months of careful planning and days of methodical packing that would be going down the drain, we pulled into the Raleigh airport, with ten minutes to spare.

We stopped right in front of the main entrance. Jeff threw the car into park and jumped out. He hastily began pulling our five suitcases, camera bag, laptop case, pocketbook, incredibly heavy golf club bag which was stuffed with two sets of golf clubs, plus our shoes and a bottle of Peach Schnapps, and my itinerary onto the curb. Klinton ran around to the driver’s side and climbed in.

After quickly giving  Klinton a  hug goodbye and instructions to keep our phone turned on, we looked around for some help. 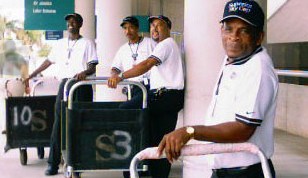 Where was a sky cap when you really needed one? Apparently, we were on our own, so Jeff took the heavy golf club bag and two suitcases and I grabbed three suitcases (one on wheels, Thank God!) the precious camera bag, my laptop and pocketbook and we staggered into the airport.

First, we had to have our tickets verified. That took several agonizing minutes of waiting in line. The we had to check our bags in. Thank God we had already solved the weight snafu in the Wilmington airport. Then we had to pass security.

The security guard took our tickets. Looked at them for a long minute.

Not again! My skin felt like it was going to crawl off my body, y’all. As the clock ticked and our precious moments passed, we stood there, and we waited. And waited.

Jeff turned to the security guard who was continuing to process other passengers, and in his most casual, conversational tone asked, “So, is this because we changed our flight schedule at the last minute?”

The security guard peered at Jeff over his glasses. “Sir, you not only changed your flights at the last minute, but I see here where you’ve already done it twice today!”

As I started to bristle up with all of my fifty years of pent-up, southern indignation fixin’ to come out, Jeff placed a warning hand on my arm. “OK!” he said, brightly. “No problem, man! We’re just in a bit of a hurry to catch our plane, but we’ll wait!”

F-I-N-A-L-L-Y, with the time down to three minutes left to board, we were cleared through security. We literally ran to the boarding area. The waiting area was empty and there was a lone employee waiting impatiently by the door. As soon as she saw us headed towards her, she motioned for us to hurry, and we ran down the hallway and onto the plane.

As we took the last two seats, on a the very crowded airliner, my stomach made a protesting growl. I still had not had a mouthful of food all day.

“Will y’all be serving lunch today?” I asked a passing stewardess, hopefully.

She rolled her eyes. “We have snacks, Ma’am. We’ll be coming back with the snack cart later.”

I looked at my watch. At least we were leaving on time. We had made it, miraculously, onto the flight. But we still had another hurdle. This plane was landing in Miami at 2:45 pm and we had to be on the ship in Ft. Lauderdale by 4:00 pm. That had seemed like enough time, when we accepted the tickets, but we were desperate, and desperate people make bad decisions. Now I wasn’t so sure. It was all making my head hurt.

I settled into my seat as the plane took off, and tried to ignore my growling stomach and my pounding head. Fear and stress had me in their grips and it was impossible to relax. I watched the flight attendant making her way down the aisle towards us, with a snack cart. She was dispensing pretzels, chips, crackers, peanuts, sodas, juice and tiny bottles of liquor!

I turned to Jeff, excitedly, “She has liquor! If she has tomato juice, I can have a Bloody Mary!”

Praise God and the baby Jesus, she had tomato juice, y’all! And a tiny bottle of decent vodka. That, along with a small can of Pringle’s potato chips, was the best meal I had ever had in my entire lifetime, up until that minute. After the day I had had so far, it was more than gourmet, it was stupendous.

By the time we landed in Miami, I was feeling a teeny bit better. When the plane rolled to a stop, I glanced at my watch. It was 2:50 pm. We had one hour and ten minutes to get off the plane, collect our luggage, find a cab, drive to Ft. Lauderdale, and board our ship.

Was this even possible? My stomach started to knot up in fear.

Everyone on the plane stood up. And then we all tried to wiggle out into the aisle. But, for some reason, the door was not opening. We all stood there. We waited. We all started to sweat. We waited some more. Ten minutes later, we were still waiting for the door of the plane to be opened.

And I wondered, “What fresh hell now? Do we have a snowman’s chance in Dixie to make it to the cruise ship in time?”

Part Five: Another Cab Driver Takes us for a Wild Ride

13 thoughts on “The Ordeal of a Lifetime, Part Four”